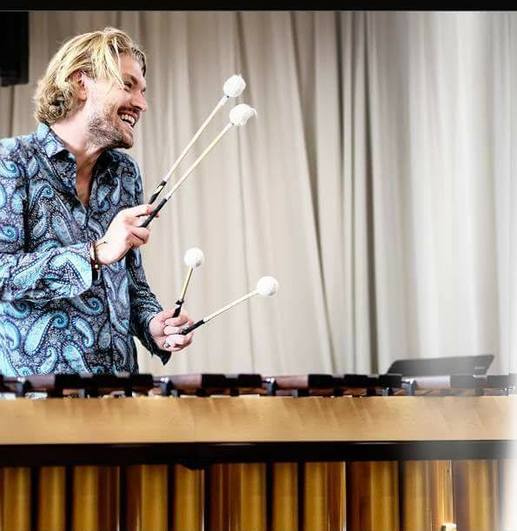 Born in Sofia/Bulgaria. Started his music education at the age of 4 in The Sofia Military Club, later on in the National Music School “Ljubomir Pipkov” Sofia under the supervision of the Paliev family. Later on with Prof. Hristo Yotsov.

Georgi has few awards such as:
During his studies in Sofia, Georgi was a long time member of the percussion group “3+3”, with which he had numerous concert in Bulgaria and abroad. Attended master classes and lessons with Alexander Kamenarov, Prof. Peter Sadlo, Prof. Bogdan Bacanu, Prof. Nebojsa Zivkovic, Frank Epstein and many others. Was a member of the CEI Youth Orchestra as a percussionist and timpanist he performed around Europe with Maestro Igor Coretti – Kuret (Italy).
Georgi, along with 5 other percussionists and one of the most renown marimba artists – Tatiana Koleva, in 2009 formed the Youth Percussion Pool Ensemble and Academy.
In 2010, he attended the International Summer Academy “Mozarteum” in Salzburg, with lecturers Prof. Dr. Peter Sadlo and Prof. Bogdan Bacanu.

Since 2012 Georgi is based in Rotterdam, The Netherlands where he was studying classical percussion and orchestral conducting and graduated “Cum Laude” the Rotterdamse Consevatorium “CODARTS” with Ramon Lormans, Hans Leenders and Chris Leenders.
During his times in the Netherlands he had masterclasses, lessons and performances with Christian Dierstein, Colin Currie, Marta Klimasara, Tchiki Duo, Peter Prommel, Randy Max and others. Performed the Dutch premier of “Variations on a Kyrie Eleison” by Peter Klatzow during his visit in CODARTS.
Had various engagements and recordings with ensembles and orchestras such as; Residentie Orkest, The Rotterdam Chamber Music Society, Doelen Ensemble, Delfts Symfonie Orkest, Rijnmond Sym. Ork, Simfonia Rotterdam, Youth Percussion Pool, EYE Museum ensemble and many others. Performed with conductors like Arie Van Beek, Antony Hermus, Reinbert de Leeuw, Susanna Malkki, Enrique Mazzola, Valery Gergiev, Yannick, Nezet-Seguin.

One of the very important moments in Georgi’s professional career was during KALIMA 2017 where he had lessons with Jean Geoffroy, Tchiki Duo and with the icon of marimba performance - Keiko Abe during her 80th anniversary birthday edition of the festival.

In 2017 formed xSight@ Pecussion Duo as an artistic leader together with Jose Minarro. By winning the Grachten Festival Concours and the Dutch Classical Talent Competition in 2019 they acclaimed themselves as a promising young ensemble in the Netherlands. Toured multiple times with the concert program “WoodenTouch” which involves original pieces for marimba duo, newly commissioned pieces and piano repertoire arranged for two marimbas.

He’s involvements as a freelance musician also include activities such as; teaching and coaching percussionists, conducting chamber music and working as an arranger for various projects. As well as being a producer for CODARTS, independent orchestral and electronic music projects. Georgi was also an active member of the Codarts Student Board.

Georgi is currently the Solo Timpanist and percussionist of the soloist ensemble of the Mannheimer Philharmoniker and an active member of Percussion Friends Foundation as an educator and performer. Commissioning solo percussion pieces and had two works specially dedicated to him – “Marimbarok” for solo marimba and “Salwahe” Chamber Percussion Concerto. Released his first CD with pieces for organ and percussion – “The Hands of Time” with organist Una Cintina in 2020. Performing percussion theater shows with Percossa and member of Mallet Collective and Stargaze. An active solo marimba performer with a distinguished sound, he had developed a new method of marimba playing with emphasis on a unique sound approach with which he is giving masterclasses across Europe.